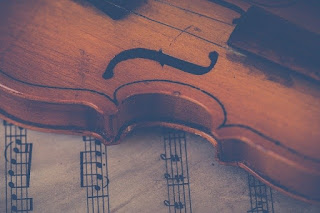 Stravinsky, Shubert and Tchaikovsky. Jacob's violin honoured their memory in the cold street for an hour. Perfect pitch, not a single note missed, not a semibreve off-key.

Beads of sweat peppered his collar despite the chill. His concentration never wavered; the intensity of sound heightened by a sense of sweet revenge, edging closer with every sweep of his bow.

Catgut, metal, horsehair and wood. Sticky resin irritating his skin, yet on he played until the last strains of the Shubert melody died away. On the final note, the metal e-string snapped and recoiled like a spring. Pain seared through his fingers as the string curled around the violin’s neck. Always the e-string.

In the distance, Big Ben struck seven O’clock. Jacob bent down, inspecting the empty fedora hat at his feet. The commuters of London showed no love for his music, but he played for himself, not for them. His violin returned to its case; Jacob walked the short distance to the Cellar bar he had chosen for his rendezvous. He almost ran down the steps in excitement, banging his violin case on the rail, as he descended into the basement below. His curse was noted, as a familiar voice rang out from the darkness. ‘Still as clumsy as usual?’

The smoky haze cleared to show his father, Saul sat amid a chattering crowd, workers fresh from the office and couples hoping wine would ease their awkwardness. His father provided the one jarring note, amid a symphony of merriment. A single candle illuminated Saul's pock-ridden face as he sat alone at a low table. Seeing his son approach, he topped up his glass from a bottle of Merlot, already almost empty. Drops of wine glistened on his stubbly chin.

Jacob sat down opposite him stowing his violin under the table. ‘I see you came to meet me after all, Dad.’

‘Of course, I did. You said it was urgent. You sounded weird on the phone, I hoped you were just desperate to buy me a drink on my birthday.’

Saul was as wretched and as ugly as Jacob remembered. Jacob shifted, trying to find a comfortable position on his hard, wooden seat. The smell of alcohol turned his stomach, but it was a necessary evil to endure. He knew that, for Saul, the lure of liquor would prove a greater enticement than the prospect of an evening spent with his son.  ‘I'll buy you a drink, Dad’ he said. ‘But can you go up and fetch it? I need to keep an eye on my violin.’

Saul coughed, and phlegm rattled at the back of his throat. ‘Ha, probably a good idea in this dump. Give us the dosh then.’ Saul swayed as he stood up, his left knee clipping the table'. Mercifully Jacob caught the empty wine bottle as it teetered on the edge.

Jacob tapped out a waltz with his fingertips as he waited for his father to return. The shadows of the curved ceiling advanced slowly towards him producing a mild sense of claustrophobia. Saul soon returned and slumped back down upon his stool. ‘Make yourself useful and pour me a glass.’  Jacob always did as he was told.

Jacob fiddled with the end of his scarf. ‘If you are referring to Josh, he left me. Although I'm pretty sure he regrets it now.’

‘He's gone, eh? Probably a good thing. I never liked him. His eyes were too close together. Never trust a man with shifty eyes.’

As Saul's spoke, Jacob noticed how his father’s wine glass danced about in his hand. Delirium tremens or Parkinson's? Either would hasten him towards the Devil. Jacob would help him take a step nearer tonight.

As Saul continued to guzzle his wine, Jacob studied his father with disgust. Forty-five years blighted by this odious man. The jibes about his sexuality, the discouragement, the constant criticism. His dream of a life as a professional musician had disappeared the moment his mother died: no more lessons, no more hope of a scholarship. Even her precious violin had been sold off, so Dad could continue his drinking and whoring. Now Jacob got by on a factory-made misfit. It could scrape out a tune but never sang.

‘How's life at the post office?’ rasped Saul. ‘You got that promotion yet?’

Jacob sat back, ‘They made me redundant. I'm still unemployed.’

‘That'll be why I've had nothing from you for months. You always were tight with your cash.’

‘There's never much to spare after rent and the bills.’

‘You mean Josh? No, he didn't contribute. It turned out, he was rather like you, in the end. Useless with money and not a big fan of my music.’

Saul laughed. ‘Can't say I blame him, but I've treated you alright. I came here tonight, didn't I? I thought you'd given up on me.’

As he spoke, Jacob noticed a woman on the next table studying him. His eyes met hers, and she looked down immediately, her cheeks reddening. He tried to ignore her and focused his attention back to his father.

‘Can't say I'm surprised,' said Saul, his words beginning to slur. ‘Why don't you find yourself a nice girl and settle down?’

‘It doesn’t work quite like that.’ The old fool just didn't get it. Jacob glanced at his watch. ‘More wine? You’d better drink up.’

‘You’re not going somewhere else, are you? We were just getting started.’ The effects of the wine had reddened Saul’s cheeks and under his left eye, two spots glowed like poison. He took another gulp and almost emptied the glass. ‘Still dragging that violin around with you everywhere I see. You taking lessons?’

‘Not recently.’ Now it was time. Jacob reached under the table and retrieved his violin case. ‘Would you like to see my violin?’

‘Nah you’re all right. It’s not like I haven't seen a violin before. Careful. You’ll knock over your glass. You haven’t touched a drop yet.’

‘No, I want to show you the violin. For old time’s sake. Look.’  As Jacob opened the side of the case, his glass flew off the table. A tsunami of Merlot splashed over his trousers and soaked through to his legs. He barely registered it.

‘You idiot,’ said Saul. ‘I told you there was no room on this table. Show me it outside, when we’ve finished our drinks.’

Saul sighed. ‘Go on, if you must. Just don’t waste any more wine in the process.’

Jacob gently wrapped his fingers around the neck of the violin and eased it from its case. He held the instrument upright so Saul could see it clearly. ‘Now, Dad, what do you notice about this violin?’

A familiar look of disinterest crept over Saul’s face. ‘Looks like any old violin to me.’

Saul lent forward, mumbling something under his breath, his eyes squinting as he struggled to focus. ‘Why the e-string has snapped. You need to get that fixed.’

‘Well spotted. Shall I tell you what happened to the e-string before that? Josh took it.’

'Why so much fuss about a broken string. What would Loverboy want with it?'

Saul pushed forward his glass. ‘Fill her up. I never could stand your riddles.’

‘Come on Dad, let me give you a clue.’ With his free hand, Jacob slowly unwound the black woollen scarf from his neck. He lent towards Saul, jutting his chin forwards and upwards. A long thin scar glared crimson in the candlelight. ‘Take a look at my throat, Dad. Now can you guess what Josh did with that e-string?’

Saul recoiled back, shaking his head and grasping hold of his chair as if to steady himself. He opened and shut his eyes in rapid succession. It was as if he was struggling to comprehend the meaning of the mark, where the metal string had cut through Jacob’s neck.

Saul finally reached a moment of clarity when the blood started to pour from Jacob’s carotid artery, mingling and bubbling with the wine in his glass. He clutched at his left arm as pain shot through his chest and tumbling off his seat, he howled like an animal. Jacob sat motionless, as glasses and bottles shattered around them.

The drinkers swarmed over, trying to calm Saul down and stop him from screaming. Only the woman seated at the next table continued to stare at the empty chair beside her.
Jacob returned his violin to its case and slipped unnoticed through the crowd, back towards the staircase. ‘Happy Birthday Dad,’ he called out. ‘If it’s any consolation, you were right about Josh.’

Emerging from the Bar, the night air caressed Jacob’s face with a delicious coolness. He rewound his scarf and faded into the darkness.